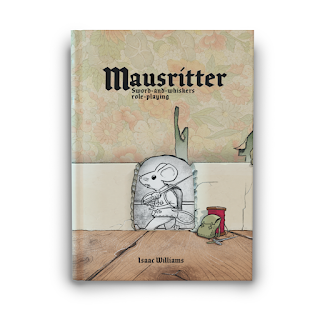 Mausritter
Both WFS and I have written favorably about Isaac Williams' Mausritter in the past, especially its mechanics, so this will be a brief review of Mausritter's adventure generating tool, found on the last few pages of the book.
The recommended campaign structure for an ongoing Mausritter campaign is a hexcrawl sandbox, where each hex contains a landmark and a complication that potentially makes interacting with the landmark more interesting. The recommended hexcrawl map is 19-hex region formed by a central hex with two rings around it. It's the same map structure as in In the Light of a Ghost Star, the same structure as a Hex Flower, and as Dungeon of the Brain Jar notes, it's a structure that's become a popular template for hexcrawling recently, sort of a wilderness analog to the jewelbox dungeon.
Mausritter's hex flower sandboxes are centered on a peaceful settlement, and each contains two main adventure sites. The player character mice don't start in the settlement though - they start in a hex with an adventure site. Getting to town is your second goal. Surviving the adventure is your first. The example hexcrawl in the Mausritter book actually only details 11 hexes our of the 19, but referees are encouraged to fill them all.
The first roll in each hex determines the terrain - countryside, forest, river, or human town. A second roll generates a landmark specific to the terrain type. These are mostly geographical features. The kinds of landmarks you might navigate by, but not necessarily anything to invite further interaction quite yet. The final roll generates what Isaac calls a "complication." These are mostly additional sites within the hex, places where mice live, and thus places where the player character mice can interact with NPCs. Example complications include religious sites, places where a lone mouse lives, even settlements. There are also ruins, abandoned places, and various naturally occurring locations. Each complication includes both a prompt and a leading question to encourage the referee to develop it further. There are also a few tables to begin generating the central settlement.
As I said, Isaac suggests placing two primary adventuring sites in each hex flower sandbox. There's one set of tables for generating the adventure sites, and another for generating what Isaac calls the "adventure seeds" - the client, their problem, and a complication. So you could pick your adventure sites by looking at the map so far and deciding where you think the two most promising locales are, or you could start by generating the sites and then deciding afterward where to place them. However you decide where to put them, you then pick one to serve as the starting point for the campaign.
I think these tables probably work best if the referee mixes some random results, some results chosen using the tables as a menu of options, and some of their own creation. There are 20 landmarks for each terrain type and a total of 20 complications - so repeated across 19 hexes, pure random generation might look a little strange, especially in a setting that's intended to be less gonzo and more naturalistic. Besides, even if you trust the dice to the maximum extent, you'll still have to make choices, turn the complications from starter ideas to actual locations and place the two adventuring sites. So my sense remains that these tables work better as sparks for the referee's creativity than as full-on stand-alone procedural generators.
I used the tables to generate a hex flower sandbox. It ended up being very heavy on rivers and human towns. Let's call it Waterland. It's centered on the fallen mouse aristocratic manor of Blackpond. The two adventuring sites are both home to rival cat lords, one of whom obviously believes the other is their star-crossed lover, and the other who is just as obviously a faerie disguised as a cat. Since I generated this map for a review, I didn't exercise any of my own choice or creativity in placing the hexes or developing any of the prompts. This is the start of a sandbox, but it won't be ready to play without a little more work from the referee. (Anne) 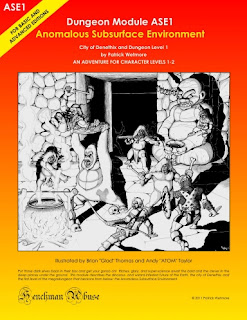 Anomalous Subsurface Environment - Patrick Wetmore - 89 Pages - 2011
"ASE" was written early in the "OSR" period and is a rare product of the era that cast D&D nostalgia aside (by embracing other 1980's nostalgia) and successfully creates a novel gonzo setting.  I have been a fan of "ASE" since I discovered it on the authors blog in 2011, written multiple locations for its setting, and even produced art and supplemental maps for it's lower levels (ASE II). ASE is a unique artifact of its time, but like Stonehell offers both cautions and instruction to the aspiring megadungeon designer.

Choosing to recontextualize (there are elves and goblins in ASE) the Gygaxian vernacular fantasy of early D&D, Wetmore creates a setting largely built around the 1980's children's cartoon Thundarr the Barbarian.  A sort of He-Man progenitor and 1970's effort to mythologize the apocalypse for children, Thundarr is set in a vaguely Gamma Worldesque science fantasy future, as is ASE.  Other influences from the same era (the stone head from Zardoz is a likely opponent) flesh out the setting, and make for a cartoony swords & sorcery whole that's both humorous and complex.  ASE, like Trey Causey's Azurth, is one of the few settings that make "gonzo" compelling, never breaking its dry, deadpan presentation of and extended absurdist, referential reading of fantasy.

As a megadungeon ASE is a stellar example, its maps (only one full level here - an excellent the setting gazetteer fills much of the book) are especially noteworthy - sprawling beyond the limits of a single graph paper page and designed with an attention to the fictional ecosystem.  The keys are generally short and written with joyful economy.  Yet this is also ASE's biggest weakness, it's a unique and novel space and, while the keys deliver necessary information in a digestible format, the very novelty of the setting seems to require more -- presenting a core difficulty of the megadungeon, that it can best exist as part of a larger setting or aesthetic because for it to remain comprehensible in a usable fashion it needs evocative minimalism that the referee can expand on.  ASE manages this, at least for me -- but for a referee that didn't grow up watching 1980's UHF and playing Basic D&D the necessary references might be harder to grasp.

ASE is a wonderful example of a megadungeon level - spatially well designed, faction rich, too sprawling for full exploration, and full of novel puzzles.  It is also somewhat incomplete. Of the eight promised levels of the ASE only three are published, (each over over 100 keys) and Wetmore appears to have moved on to other things.  Still, if you have the dedication to run a game that reaches to 4th level of a megadungeon ASE's size, you likely have enough to produce your own additional content. Anomalous Subsurface Environment is a worthwhile adventure both for the Classic designer and referee. (Gus) 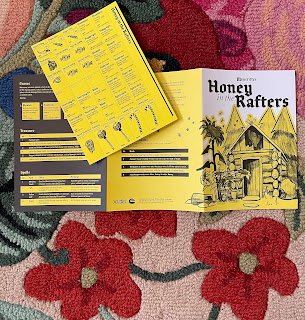 Honey in the Rafters by Isaac Williams

Honey in the Rafters is the introductory adventure location included in the original Mausritter boxed set. The keyed location for the example hexcrawl included in the Mausritter rulebook, it serves two purposes: to provide an out-of-the-box (literally) experience for an initial session of Mausritter and act as an implicit guide for how to prep an adventure for Mausritter. More than anything, it is that second purpose that I value in a starting adventure. Starting adventures are instrumental for training referees to the type of prep best suited for the game. When I started playing Dungeons & Dragons, much of my early prep emulated the bloated adventures of the 3.5/Pathfinder era. I wish I had instead cut my teeth on something like Mausritter. Honey in the Rafters says to the burgeoning referee that all you need to run a game are a few d6 tables, a couple of factions and a mental map of the location. This simplicity and elegance are befitting a system like Mausritter.

A cursed sunflower sprouts outside an abandoned cabin. From this flower blooms the adventure’s various factions. The flower and its pollen attracted a colony of bees and a hungry skunk (as an aside, bees and skunks sound harmless enough to you or I, but imagine how deadly those foes would be for a party of adventuring mice). The honey from the bees attracted a cadre of mice belonging to a sugar cult. Each faction presented sounds fun, but I would have liked to see more explicit connections between them. For instance, maybe the skunk wants to eat the sugar cultists in the cabin but is afraid to enter because of the bees, the bees want to drive out the skunk from the sunflower field and are distrustful of the sugar cultists’ leader, and the sugar cult wants the honey (that is made clear) but is blissfully unaware of the skunk. These types of connections are particularly helpful for an adventure where factions are such a central component.

Honey in the Rafters not only demonstrates how to write a Mausritter adventure, it is also useful for would-be homebrewers curious about adding spells and items to the mix. The adventure includes a handful of spells and items that are absent from the Mausritter book (such as Taffy, allowing a mouse to stretch its limbs to unnatural proportions). Particular standouts here are the weapons—what self-respecting mouse wouldn’t wield a candy cane or lollipop instead of a sword or axe? After reading Honey in the Rafters, I am like those sugar cultists, left wanting more, more, more of the sweet stuff. (WFS) 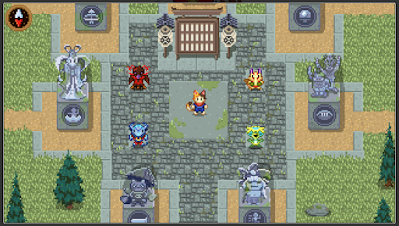 Similar to my Hold in the Oak review , I again will be using Arnold K’s dungeon checklist. I have not played this adventure, but it grabbed...