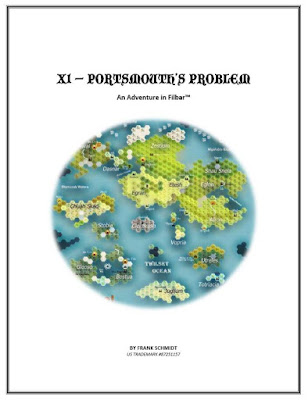 Another perusal through DTRPG's "Newest" category brought me to Portsmouth's Problem. As of writing this critique I have read it, but not played it.

RPG play has no set medium for communication. A variety of disciplines can be employed: illustration, cartography, rules, poetry, prose, tables, layout. In the best examples of the RPGsmith's art all of these come together to form a more complete whole. However, it is a rare hobbyist producer who is practiced in all these varied disciplines. That's okay! A person can create a great game aid using just one of them so long as they use it to effectively communicate something fun and useful to play with. So while I was disappointed to see that Portsmouth's Problem consists only of text, two software-generated maps, and a photograph of a cobblestone street, that doesn't preclude it from being a fun and useful game aid. That having been said, the value and charm of this adventure could have been increased by the inclusion of amateurish writer-doodled illustrations. They were good enough for the three Little Brown Books, and they're good enough for me!

Bandits hiding out in the city's sewers is a cliché setup for an adventure, but the cliché at least gets a few unexpected wrinkles here. The hideout is new, and still under construction. The bandits are in the process of diverting sewage to make room for themselves, and have failed to account for how their work would impact the sewer's effectiveness. As a result the party have been hired to investigate the terrible stench wafting into the bakery district. As they explore they'll encounter a variety of "water" hazards created by the bandit's engineering. It's a fun premise. In my own games I enjoy getting back to basics from time to time, especially when I'm starting a new campaign or introducing new players to the game. But getting back to basics is—almost by definition—an easy thing for any moderately experienced referee to do. Without a lot more wrinkles I don't think this premise has enough to offer.

Structurally, Portsmouth's Problem assumes a rigid style of play I do not enjoy. Getting into the dungeon requires the party to follow a fairly long trail of breadcrumbs. It starts at a job posting board, then there's a meeting with the titular Portsmouth at which the party are meant to see a fragment of a map on his desk which he quickly hides from them. Then the party are supposed to find the location they saw on the map, and once there must locate a secret door to enter the sewers. All of this either represents the referee talking for a very long time, or pushing the party to make a series of specific decisions (the text suggests the latter). It could be that this is meant merely to be the optimal route. The sewer map does show a second entrance from that stinky bakery district. It would make sense if this entrance were easier to find, and the entrance behind the secret door were merely an option for clever players to pursue. However, the bakery entrance is not mentioned anywhere in the text. Moreover, one of the first encounters a party is likely to have when entering through the bakery entrance (Area 3) is described in great detail in terms which only makes sense if they are approaching said encounter from the secret-door-entrance side.

Chambers are often described in ways I find confusing. Aside from assumptions about how and from where the party enter them, their content can be jumbled. Area 6 is the most notable example of this issue. It's a sewage-filled hallway called "Rapids." The sewage is described as hiding the fact that the slope of the tunnel is rather sharp, which makes me think it must be somewhat deep. Yet it also says players moving through the space must make a Dexterity check or slip on lichen and slide down the chute. Try as I might I can't reconcile the elements of this room's description into an imaginary space I can understand. Similar problems exist in other rooms, aggravated by an excess of grammatical inconsistencies. Words and phrases are enclosed in quotation marks for no apparent reason. A solitary monster is described has having 26 hp "each." The text gives the impression of having been run through spellcheck without a human ensuring the computer's corrections are the right ones. For example, "The either bandits will attack." in a room with eight bandits. A minor error, but when all the minor errors come together the text becomes difficult to parse.

The map has similar issues. It's nicely Jaquaysed, but this is at odds with the unidirectional way the rooms are presented in the text. The relationship between Areas 4 and 5 is of particular note. There appears to be a solid wall between them, but there also appears to be a flow of water. The wall breaks the otherwise rigid grid pattern of the dungeon's layout, so it's clearly special. It could be that the wall is a new construction. Area 5 does have engineers who are described as "surveying the recent handiwork on the wall." However, other recently built walls in the dungeon (like those in Areas 4 and 8) are represented by the blue sewage coming to a halt rather than filling the room. There's a similar halt to the flow of sewage in Area 5, so my impression is that this must be where the engineer's wall is located. Additionally, if they had constructed a wall between Areas 4 and 5, sewage wouldn't be flowing between those two spaces. So I remain unclear on what's happening here.

I'm also confused by the behavior of the adventure's NPCs. Why would Portsmouth hire the party to break up his own bandit operation? He apparently doesn't want the party to succeed, but doesn't do anything to stop them aside from refusing to help after he hires them. He doesn't even warn the bandits. This adventure is only one part in a series, so it may be that this question will be answered in a later installment. It seems a glaring incongruity not to be addressed within the text though. The bandits also behave oddly. They attack on sight when encountered in small groups, but will initiate a parley in Area 7—the one room in which they might have a numerical advantage.

One last item I feel the need to address is the optional misadventure. It's meant to be encountered while the party are on their way to visit Portsmouth at the start. The details are left fuzzy. The players are not expected to engage with it. None the less it seems clear that it depicts the party stumbling into a domestic dispute of a sexual nature. I suspect the author intended for it to be a lighthearted dispute, but I can't know because it's literally just a naked woman being chased through the city by her partner. That's heavy stuff to drop into a simple bandit-bash adventure without giving it context or purpose.

If I understand correctly, Portsmouth's Problem is a write-up for something the author used in his home campaign. I'll bet my bottom dollar it was fun to play at the author's table. However, translating that fun onto another person's table would require clearer communication.

X1 - Portsmouth's Problem: An Adventure in Filbar was produced by Frank Schmidt, and is available as a PDF from DriveThruRPG for $3.00.