I don’t know Greg Gillespie, I don’t have any intense feeling for his work or his design history, as while I have looked at some of previous adventures they haven’t made much impression on me. I suspect he was on G+ and I may have spoken to him there, but I don’t remember anything specific from those long ago days. I purchased the Dwarrowdeep PDF (which costs as much as a good bottle of booze or nice steak - but cost isn’t a criteria I use to judge adventures) specifically to read it for this review and because of my overall interest in megadungeon design. I have not played it and don’t intend to. As always I will take a look at it for what it offers as a playable product and from my perspective as someone interested in dungeon and megadungeon design. I feel somewhat guilty about this review and don’t expect Mr. Gillespie will appreciate it much, but after spending a week reading Dwarrowdeep - time I could have used for paying work or on my own hobby projects - I can't play nice for the sake of comity, even if I'm not trying to be cruel. Darrowdeep is an abject failure, but in that offers a useful example of how not to design a megadungeon and asks questions about the limits of dungeon design.
1987’s GREATEST  2022’s MEGADUNGEON!
Dwarrowdeep is the new (May 2022) 336 page megadungeon by Greg Gillespie, known as the writer of Barrowmaze and a few other big dungeons. This has made Gillespie a notable figure and dungeon designer from the early and middle years of the OSR. What Dwarrowdeep offers is a brand new megadungeon that I had hopes would highlighting the state of design in 2022 and the evolution of the form since the early days of the OSR or at least the 2010’s when Gillespie published Barrowmaze ... if it does, it only shows a loss of basic knowledge and the decline of OSR design and imagination over the past decade.

In light of its recent publication and Gillespie’s long career as a megadungeon designer I was hopeful that Dwarrowdeep would be something special, offering new ideas, or better utility - in short I was hopeful that it might have something to teach about megadungeon design. I was gravely disappointed. When I write reviews I try to be charitable and understand the author's goals rather than focus only on the work's failings, but Dwarrowdeep’s positive aspects are largely limited to the excellent art within, an audacious scope, and occasional moments when a decent idea shines through the mediocrity.

Dwarrowdeep fails as a megadungeon in three interrelated and key ways: variety, interactivity, and usability. I suspect this is the result of both ambitiously excessive scope and the poisonous idea that nostalgia alone is sufficient to produce good work. What I mean is that Dwarrowdeep doesn’t just try to provide a nostalgic aesthetic or feel, it goes deeper, with nostalgic layout choices, nostalgic key design, and nostalgic approach to setting (generally emulating the early 1980’s BECMI era TSR adventures). This fails, partially on its own merits, but partially because it’s so insistent on cleverly aping a particular, possibly imaginary, past that it ignore the work of other designers, both since the early 80’s and before. Dwarrowdeep drowns because it chooses to submerge itself in the nostalgia for a design that wasn't optimal even for the 30-page BECMI modules where it first appeared.
Read more »
by Gus L at August 23, 2022 16 comments:
Email ThisBlogThis!Share to TwitterShare to FacebookShare to Pinterest
Labels: Gus L, Spectral Interrogatories 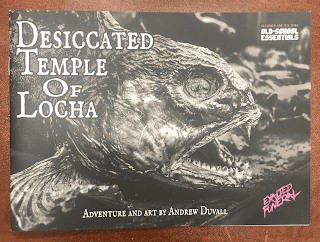 Similar to my Hold in the Oak review, I again will be using Arnold K’s dungeon checklist. I have not played this adventure, but it grabbed my attention.

THE BAIT: This 6 in x 10 level 1 adventure from Andrew Duvall published by Exalted Funeral and was an upgrade from the similar adventure published in KNOCK Vol. 2. This “long” format is novel in the RPG universe, but its proponents are correct. It is easy to place on the table especially if you have a DM screen or computer as well.

So what drew me to this adventure? The first thing was the phrase “desiccated temple”. How interesting–”all water removed/dried up” or maybe “preserved”. And “temple” of course brings in a religious and/or ritualistic aspect. I thought that was novel because often in fantasy adventure games we get “cursed”, “haunted”, “ruined”, “abandoned”, “forgotten” or “lost”. If you grab your copy of the Tome of Adventure Design (I did), you are not going to find “desiccated” in there.

The second thing was the interesting stock photo used– a close up of a dried fish, teeth bared, with a hint of frozen lunge toward prey. Nice. While manipulated stock photos are a staple of DIY/indie RPGs, again, they rarely feature sea life (at least in the fantasy wing, CoC is a different story). Sea life is inherently uncanny, more so when it's dried. In total the cover is hinting at something interesting- undead fish-people. But maybe not true undead, but desiccated.

HOOKED ON UN-LIFE FISH-PEOPLE: So what else is there to reel you in? The next interesting thing is the Tension Dice mechanic. It's sorta a variation on the encounter die where 1d6 is added to a pool every time PCs make a loud noise or one exploration turn elapses. The DM can roll at any time but must roll when the pool contains 6 dice. Count up the number of “1s” rolled and the total is what you use for the associated encounter table of typical dungeon vermin. Also is a table for aquatic tomes (treasure) and hallucinogenic spores (traps).

The center of the book is occupied by an isometric dungeon in two parts both keyed in a one-page dungeon fashion. Easy to reference, but demonstrates how simple this dungeon is: entrance, central room, 3-room east wing, 3-room west wing, “north” double doors leading to two large rooms; altar and the primary treasure and guardian. The next page contains a blank map of the whole area in one page along with fuller item descriptions. And a copy of the keyed one-page dungeon as it appeared in KNOCK Vol. 2. Inside the back cover is also a small delight: paper miniature cutouts which I think are a nice touch.

CATCH & RELEASE(?): Let’s take a quick run-through using the list and discuss some shortcomings that, if adjusted, I believe would make this adventure stronger. The list:

“DARLING IT'S BETTER DOWN WHERE IT'S WETTER!”: I believe there are some easy adjustments that could be made to this material that would make it stronger. The goal, to me, of a low-level adventure design is to provide the PCs with XP to level and resources to survive subsequent adventures, while giving the players a strong sense of fantastical adventure – even if it is small in scope.

To that end, let’s first adjust the final treasure to be a big mythical green pearl worth 1000 GP (and therefore XP) which does more for a 1st and 2nd level PC than a magic item. And let’s remove the random tomb tables and just combine them with the scrolls found in the adventure (i.e. Nektonic Serpents Codex as Hydroblast scroll) – just cut to the chase. It's doubtful people will reuse that specific water-themed tomb table. Anything else that is an item, like the alchemy set (heavy and bulky), gives a GP value too as well.. Also, I would not gate most of the dungeon behind the fish-bowl puzzle, instead I would just gate the big treasure and the final guardian behind the fish-bowl puzzle. With this rearrangement you would have a small score, the gold idol (500 GP), in the open, but the larger score, The Bell of Locha-turned-Pearl of Locha behind the puzzle. Now players can explore 75% of the dungeon, but really only get ~50% of the value. And it would act as an enticement if you players are initially too wary of it as a trap. Rumors in the inn of a large pearl or a fresco to that effect on a wall in the library can clue players in.

Next, reskin monsters. While I understand this is supposed to be a dry tomb, hence terrestrial creatures, players won’t care and instead are more likely to delight in facing a thalassic-themed wandering monster table. Simple reskins can do a lot of work. So 1. Giant centipede, 2. Driver ant, 3. Insect swarm, 4. Giant rats, 5. Gelatinous cube, 6. Rot grubs instead become: 1. Giant sand-striker worm, 2. Mantis shrimp, 3. Sand-flea swarm, 4. Bilge rats, 5. Cubic Man-o-war, 6. Rot Barnacles. But I would actually remove the rob grubs and replace them with “Awaken nearest Priest of Locha: 50% will ignore PCs and awaken another priest”. Let’s get this quiet temple hoppin’! Same treatment for giant spiders, let’s make them giant spider crabs.

Finally, is this a dungeon of fish-people or people imitating fish? It's not noticeable at first glance, but for habitable areas built by aquatic people it has a lot of terrestrial trappings. Why are there beds with sheets? Instead of a bed “carved to look like live coral”-- make it live coral! Why not giant sponges or maybe anemones that the fish-folk can sleep in like a clown-fish. Why are their chests? Why not giant clams that don’t have locks but you have to tickle them or something? And why tables? If you come from an aquatic environment, wouldn’t it be more nets or something? Too much of the scenery is not aquatic enough. Would you even have stairs if you mainly used fins? If the temple was in water, wouldn't buoyancy be taken into consideration? True this might be more 20-30ft shafts but that is what thieves/acrobats, 50’ft ropes, Feather Fall, and hammer & spikes are for. Let the players figure it out.

Basically this place should look like a drained fish tank or pond (e.g. Deep Carbon Observatory), not a fantasy Panama City Fuddruckers.

And if you really wanted to turn the “wyrd” up a notch, how about this is a temple of people imitating fish instead of fish-people. Injured or wronged pirates or sailors who’ve turned to the only mother they know, the sea, to bestow salvation but come with disturbing boons like deep-sea fish teeth or forehead angler lights. Maybe each desiccated priest has a flounder grafted to their chest as a set of artificial sea lungs– go sorta fantasy Bioshock with it. Or think how a sea-deity might bestow gifts if constrained by only things from the ocean.

FINAL: In its initial one-page dungeon form Desiccated Temple of Locha was a solid adventure. But like most OPD, when expanded a little more consideration needed to be taken of how adding extra pages would benefit the adventure itself, a GM running it, and the players playing it.