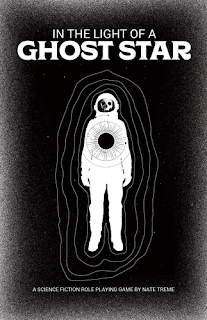 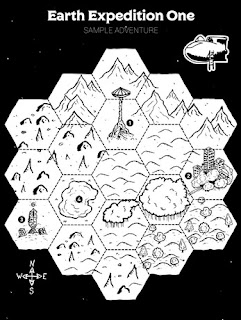 Aside from the use of skill rolls, Ghost Star also has rules for inventory and travel. Characters start with 10 inventory slots, and can gain another each time they return to Mars with 5 artifacts. Presumably, items from the equipment list take up 1 slot each, although this isn't mentioned. Ancient Alien Tech is more cumbersome, and each one takes up 2 slots.
Rations are a little odd - each ration feeds you for 2 days, meaning you really only need three rations per expedition. In my playthrough, this created a memory issue. I would recommend a modification here, either making each ration feed you for 1 day, or else using something like The Scones Alone's "expedition resources" so that each ration provides a single meal for the entire party.
"The transport ship lands in the dunes in the center hex. The pilot tells the scavengers she’ll pick them up at the same spot one week from now. Their job is to explore the area and find as many valuable artifacts as they can before it’s time to leave. Five hexes have named locations which are described below. When the scavengers enter a hex without a named location, roll on the encounter table (pg. 6) to see what they find. It takes a day to travel across a hex."
The rules for travel appear at the start of the key for the sample adventure. One key rules update between the 1.0 and 1.1 edition of the game was reducing movement from 2 hexes per day to 1 hex per day. The Retired Adventurer and Necropraxis have good explanations for why you might prefer single-hex travel, especially in a rules light game. I think Nate was wise to make that simplification.
The Adventure
Earth Expedition One covers a small region of 19 hexes with four obvious landmarks and a hidden dungeon that we never found in my playthrough. Peter added some of his own house-rules, but I believe we had substantially the expected player experience.
We began by meeting the astral-lich and volunteering to find books for his library, a task we never accomplished. We scouted the city of the war apes and narrowly avoided being slain by them. We had several random encounters en route to the pylon and the lake. We were unable to make it back to the landing zone in time, but had fortunately found an artifact that allowed us to contact our pilot to set up a new pick-up site. We had enough treasure to pay our fare, but not to "level up" at the end.
With so few keyed hexes the experience of this adventure is largely governed by the random encounter table. I like that Nate put effort into facilitating the social element of the game. Each keyed hex offers a named NPC to talk to, someone who wants something or has something to offer you. The faction occupying each random location has a goal they're pursuing. Robot bandits would rather trade insults than get into gun-fights. Not everyone is friendly, but everyone has an agenda you can interact with. It's a nice touch that adds a surprising layer of complexity to an otherwise simple game.
The random encounter table is focused enough to create a specific setting, but reusing it would start to accumulate a lot of repetitions. I do have a concern about the robots on the encounter table. Both "rumors" and "ghostly apparitions" appear as sub-tables nested within the main encounter table. First you learn that there's a rumor, then you roll again to learn what it is. But each robot is on the top level of the encounter table. The robots are all well-thought out, humorous, and highly specific. They would be perfect for keyed encounters, or for a sub-table, but I think they're not quite right for the top layer of a random encounter table.
To see how random tables would function over the course of an entire region, I created my own 19 hex mini-setting using the hex stocking rules from Ghost Star. Since I'm generating this for review purposes, I used the exact results of each table, rather than creatively modifying anything as I might if I were prepping a session as a referee. If you were to run this adventure, you might want to replace some of the duplicates the birthday paradox gives us. This region seems to me to be the site of a robot carnival, perhaps set up to celebrate a rare sighting of the Legendary Space Whale.
by Anne at June 30, 2021
Email ThisBlogThis!Share to TwitterShare to FacebookShare to Pinterest
Labels: Anne, Dungeon Dioramas

State of the Sepulcher

To ring in the new year, our skeleton crew has decided to take stock of the state of our nighted sepulcher. Our conversation ranges over wha...