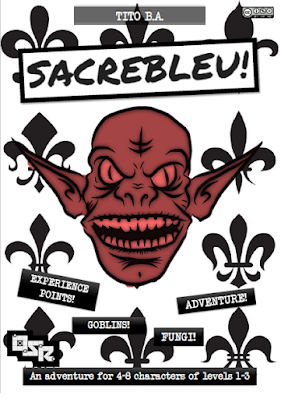 Sacrebleu! is a book I first found 3 years ago while browsing DTRPG's "Newest" category, and something I wanted to revisit for this project. As of writing this review I have read it, but not played it. As an additional matter of disclosure, fellow Bones of Contention writer Gus L. is listed as an inspiration in the back of this book. He did not have any direct input on the book, nor on this review.

My most frequent frustration with RPG books is overwriting. Bloviating authors burying anything original or interesting about their work under too much detail, too much handholding, too much filler. Sacrebleu! is refreshingly direct. This is adventure design winnowed down into a sort of poetry. The setup is this: a father and his sons built a port town on this weird little island so they could control the harvest and sale of a narcotic moss which grows there. The sons betrayed the father, who got polymorphed into a goblin. Goblin-dad then became chief of the local goblins, killed some time-traveling WWI French soldiers, and ate their brains to learn how to use their guns and grenades. He sought revenge against his treacherous sons, but his efforts were foiled because the goblins unexpectedly inherited some PTSD from the brain eating. Now both sides are licking their wounds, trying to figure out their next move, and the players have landed right in the middle.

When I say the writing here is a sort of poetry I'm not just reaching for a fresh way of saying "thing good." I mean that, like good poetry, it conveys a density of meaning within a very few words. For example, it is a common trope of settlement description to include the menu of the local inn. I've never found much use for this. "Soup—1cp; Stew—3cp" doesn't tell me anything that will ever matter in my game. Sacrebleu!'s town of Fairmead also employs this trope, but cuts down on the space dedicated to it by including only a single Chef's Special from its two restaurants, and increases its impact by describing specific dishes rather than vague categories of food. Knowing that two common and beloved foods in Fairmead are "clam chowder with fried plantains" and "tiny fish sold in a sack for 2cp, very salty, leaves scales everywhere" gives me something to work with. It tells me how the town smells, what the local farms are growing, what the fishing boats are catching, what sort of trash will be laying in its streets. That's not even the limit of the useful information associated with the two eateries, let alone Fairmead as a whole.

There's an obvious trajectory for how the players are meant to interact with the adventure. They'll start in Fairmead, because it's the port and only settlement on the island. There they'll learn about the town's recent tribulations, and will likely have their interest piqued by the goblin's peculiar weaponry. With or without a mandate from the town's leadership the party is likely to set out along the road to investigate, engage in some set-piece encounters, and earn some treasure. The book also includes just enough for players to find when they wander off track. There are some interesting encounters, a few implied sidequests, but nothing big enough or profitable enough to divert them from figuring out what's up with the goblins that have machine guns.

There's an ambush along the road which is a particularly nice little setup, well illustrated by the art. Funneling players into a specific situation after the adventure has begun is anathema to OSR-style play, but it's pulled off very nicely here. Players are likely to follow the road, and goblins with WWI tactical training in their brains would absolutely set up an ambush along the road. It's an encounter with a high likelihood of occurring naturally, and nobody could complain about being railroaded into it. If the players are cautious enough to avoid the ambush, the book includes appropriate accommodations to reward their foresight.

Speaking of the illustrations, Sacrebleu! is not an adventure you would get for its art. Aside from the cover (with its charming promise of "Experience Points!"), and a lovely little hand-drawn hex map by Marcelo Lee, I believe everything here is taken from the public domain. That makes it difficult for the book's concepts to be illustrated effectively. In this regard the ambush is an exception rather than the rule. It also creates an unpleasant stylistic inconsistency, mixing medieval wood carvings and 19th century pencil sketches and old photographs in a jumbled pell-mell. There's also just too much of it. Nearly ever page has 2-6 illios, when 1 every other page would have been ample. All that having been said, credit where it's due: there is some nice collage work, and some well chosen pieces, and it must always be remembered that independently produced RPG books come from creators without budgets. A person need not be a triple-threat writer/artist/layout expert in order to make valuable contributions.

If the book has a major flaw it's information design. The situation on the island is laid out gradually, one bit falling into place at a time. This makes for enjoyable reading, but would be difficult to reference back to. Literally one of the last things mentioned in the book is that one NPC wants to kill another. At that point I'd thought I was well acquainted with both NPCs, but also thought they were good pals. When traveling around the map, encounter tables can be found on page 3, 6, or 11 depending on what terrain the players are moving into. The goblin's fortress will have different room contents depending on how the roadside ambush went, but the division between those possibilities is not always clear. In a short adventure like this one these are all minor issues. I'm confident I have enough of the book committed to memory that I could run the adventure with hardly any reference, but better organization would still have been a help here.

The primary dungeon on the island is—to use my own terminology here—not a dungeon, but a fortress. That is to say: the whole location is controlled by a single faction who are organized to defend it from outsiders. In this case there is a single room controlled by a different faction, but it's sealed off from the rest, so the fortress designation holds. Dungeons are a place to be explored, but players cannot really explore a fortress until they've taken it, after which the exploration is largely perfunctory. The primary play experience of a fortress is a big running encounter. Combat and stealth, broken up by the occasional reprieve when the last group of enemies has been killed and the next has not yet been encountered. I don't point this out because fortresses are bad. They're not, they just don't facilitate exploration based play. In this adventure the exploration is in the island's hexes, and to the author's credit the fortress is well designed for what it is. Not too big, with good interconnection between the rooms, and a mysterious machine to tinker with after the goblins are dealt with.

One final criticism—and TBH I'm reaching here because I don't want to seem like I'm fawning over the book—is that the final location, the temple, feels rushed and sloppy by comparison to the rest. Given that this is also the location with Tito, the optional NPC who was driven to madness by writing an RPG adventure, I suspect the author might agree.

Also, because I couldn't find anywhere else to put it, I just wanted to add that I like the weather system for the island. It's fun, functional, and has a 1-in-8 chance of literal frogs raining from the sky. I think that's neat.

Sacrebleu! was created by Tito B.A., using a map by Marcelo Lee. It's available on DriveThruRPG for $1.00.
by LS at August 30, 2021
Email ThisBlogThis!Share to TwitterShare to FacebookShare to Pinterest
Labels: Flying Dice, Nick LS Whelan