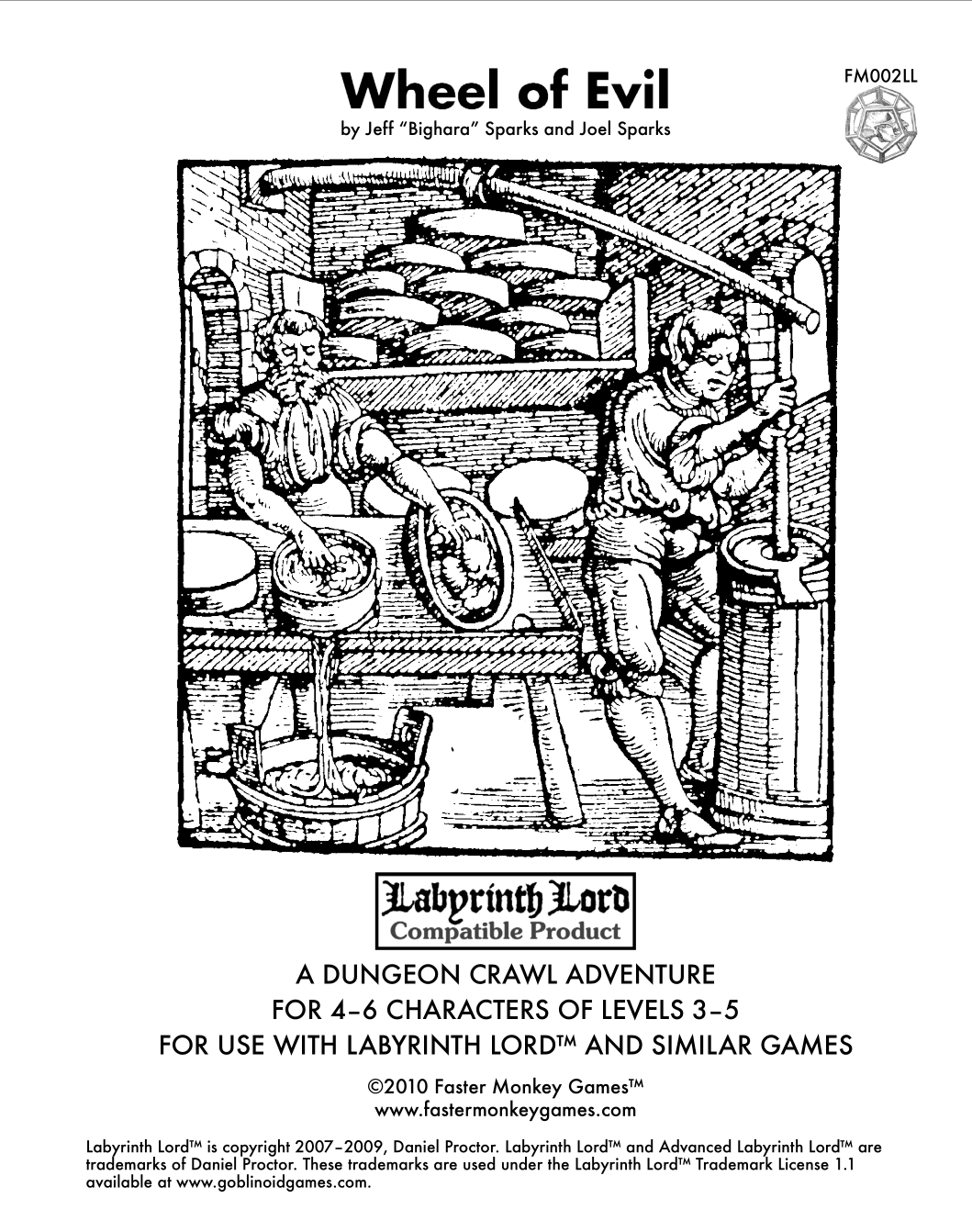 Wheel of Evil is a module for use with Labyrinth Lord by Jeff "Bighara" Sparks and Joel Sparks, recommended for 4-6 characters of Levels 3-5. I ran this module as part of my ongoing home campaign, ran in Errant over the course of about 3 sessions, with 3-6 players ranging from levels 1 to 3.

The basic set-up of the adventure is that the party is hired to protect some generic town's prized cheeses from marauding kobolds. This familiar premise is soon up-ended as the party quickly discovers that there is something more sinister afoot. Soon they will stumble into a subterranean fungal hell ruled by a sentient mold with plans for world domination, and those lowly kobold the party was prepared to genocide are likely to become valuable comrades, their bottles of distilled urine a weapon to combat the mycelial menace.

A Blast From the Past

Remember when Labyrinth Lord was the system du jour for the burgeoning OSR? Go back through the archives of DTRPG far enough, and you'll see our current crop of made for OSE adventures give way to LotFP, and before that to Labyrinth Lord (or at least, that's what the historical trajectory of my DTRPG library looks like). And something you'll notice on those modules which you don't see as much nowadays in modules, or at least not featured as prominently, is the expected range of player characters and their levels that are suitable for playing the adventure. This little snippet of paratext is, I think, key for interpreting the contents of the module within.
Because within this module, dear reader, you will not find any Kempian lateral thinking challenges, McDowellian traps, Gustovian factions or orienteering, combat-as-war, or any of the other well-worn bon mots found in the Principia Apocrypha. The structure of the module is, essentially, an introductory prelude of exposition and light investigation followed by a linear progression of set-piece encounters with a succession of Morale 12 Hostile creatures (aka guaranteed fights to the death). The one section within the adventure in which there is some non-linearity hazarded, as the players find themselves lost in a sprawing complex of cave tunnels that they will need adequate light to navigate, is handled by a succession of ability checks, resembling nothing so much as a 4e skill challenge. Indeed, there is no chance of the players failing, even if they run out of light sources, so long as they manage to survive the two pre-determined encounters that occur within this section (and any wandering monsters). After 8 ability checks they are guaranteed to move onto the next part of the dungeon.
To me, this is indicative of a time when the R in OSR might be better understood as "revival" rather than "renaissance". While the OSR and its proponents often purport to be a return to the good old days of how the game used to be played, this is nothing more than a romantic creation myth; as John B. notes, the play culture of the OSR and its precepts is a latter day invention, a re-reading of the fundamental texts that revealed new avenues of play largely unexplored. The predominant culture of play "back in the day", which John B. dubs Classic, is the style of play we can see evinced textually in the TSR tournament modules of old, with a focus on the

linked progressive development of challenges and PC power, with the rules existing to help keep those in rough proportion to one another and adjudicate the interactions of the two "fairly".

And it is this play ethos that I see reflected in Wheel of Evil primarily. This makes sense to me historically; that early in the OSR's history when values, norms, goals, and expectations around design were still inchoate and yet to cohere into a more stable play culture, early efforts by revivalists would align more closely with early D&D design as they actually remembered playing it, rather than how the "OSR" design orthodoxy which later emerged would dictate they remember it.

Taken within this context, the design decisions of Wheel of Evil seem much clearer. Structurally its very similar to a tournament module; even the reward structure of the adventure, with characters paid in shares of sales from the cheese festival, the value of those shares determined by a number of key factors related to the party's performance within the adventure, functions explicitly as a sort of grading system akin to those employed by Referees at conventions. Within this framework, the linear adventure and the set-piece encounters function to provide a uniform rubric against which the player's performance can be evaluated.

Yet more textual evidence for Wheel of Evil falling more squarely within a classic mode of play rather than a normatively OSR lies in the adventure's adherence to the aesthetics of Gygaxian vernacular fantasy. Yet another norm of the OSR is the reskinning of monsters, describing them in odd ways, and refusing to name them; this is to undermine player's attempts at system mastery and force them to engage with novel and unexpected challenges beyond those for which they have an expected frame of reference. By contrast, many of the encounters in Wheel of Evil seem to rely on an assumption of system mastery, that your players will know what a shrieker is, or a yellow mold or gelatinous cube or black pudding. It deploys these familiar creatures in novel situations, using their presence to signal to savvy players to be on the look-out for danger and treachery. Successful players will parlay their knowledge of these monsters to navigate the new and novel situations they've been reconfigured into, while those who do not recognise the black masses being spat out by a minion in the boss battle as a black pudding or the immobile skeleton floating down a tunnel to be evidence of a gelatinous cube and not some malign undead are likely to have a very bad time.

Almost all the regional hamburgers George Motz presents in his YouTube show are pretty much the exact same burger with one or two slight variations. And yet, within the constraints of this formula of bread and beef, these slight novel introductions manage to produce what feel like wildly different culinary experiences. Looking at Wheel of Evil, this is similar to what I find to be the joy of the vision of Classic design with which it presents us.
The scenario design in Wheel of Evil feels like a tone poem or a limited palette painting that asks, "how many ways can we combine all the classic oozes, slimes, and molds in D&D to create weird new encounters?" By working within a known and stable set of conventions, the slight novelties and variations it introduces strike me as being all the more surprising and delightful. The excitement and tension within the module derives not from the vast possibilities arising from a sandbox or a more open-ended adventure, but from the juxtaposition of discrete mechanical parts (e.g. monster statblocks or traps with very particular abilities represented mechanically) whose interactions present very narrow paths of success. The very first hostile encounter within the module sets the stage for this, with a large mushroom grove within which lurks an incredibly stealthy high HD monster with a paralyzing attack (and as the ability to swallow a paralyzed target) as well as a number of shriekers which will immediately alert said high HD monster. This is also illustrative of a trend within the encounter design where a familiar monster will be combined in an encounter with a new, bespoke creature, or else be presented in a novel environment (the chamber leading to the boss battle is a shallow pool studded with slippery stepping stones, within which lurks a gray ooze) or form (miniature starter cultures of yellow mold, or mini black puddings, for example).
This mechanistic adventure design produces an almost point-n-click adventure game logic to the puzzles and challenges within the module. Preceding the dark, twisting caverns is a grove of bioluminescent fungus, which will glow for 1d6 hours; before the players descend into the fungal depths they have the opportunity to discover a large still of distilled alcohol, which the fungus monsters in the module are weak to (and later on they will encounter a cadre of potentially friendly kobolds who have similarly helpful flasks of distilled urine). In the spirit of presenting a tournament-esque level playing field, everything a group of clever players would need to bring to bear to be successful exists within the closed system field of the adventure itself.
The corollary to this is that there a number of very clever, rather devious "gotcha" moments in the adventure waiting to catch unwary players off guard. The first and most obvious of these is the mold valve in the starting section of the adventure: investigating too closely will lead to that character getting stuck in the valve and, if not rescued, being deposited to the lower levels of the dungeon in an unconscious state, where they will be carried by a bunch of goons to be devoured by the boss monster of the dungeon. Their party members have time to rescue their unfortunate comrade, but the most readily available way to damage the mold valve, fire, will also end up causing damage to the cheese that provides the bulk of the party's reward. Another trick that I particularly enjoy is that, right after the party emerges from the dark, winding tunnels that require light sources (e.g. torches) to navigate, their next encounter will be with a creature that is attracted to fire; a clever party who managed to navigate these tunnels by mushroom light quickly enough won't face this danger.
My favourite, however, has to be the twin pit traps. When I ran this module, the party sprung the first pit trap, and then, being on the look-out, easily spotted the second pit trap further down the hallway. But, beyond that second pit trap, is an ochre jelly whose proportions just so happen to perfectly align with the size of the pit trap they avoided springing. Thinking themselves very clever, they goaded the slow jelly back down the hallway, avoiding a fight by making it fall into the pit trap. To their dismay, however, they then saw the translucent mass of the jelly that the bottom of that second pit trap contained some very attractive plate mail and a magical greatsword, which was rapidly being dissolved within the acidic mass of the jelly.
There is a great joy in seeing this kind of tight design, similar to the feeling one gets seeing a well-engineered Rube Goldberg contraption go off. While such design may not be en vogue in the old school scene anymore, I think there are many valuable lessons to be drawn from the examples set by Wheel of Evil.

The kobolds in this adventure all speak in peevish Bavarian accents. This is great. It seems the natural extension of WH40K's football hooligan Orks. I want to see every problematic fantasy humanoid recast as a farcical European caricature.
There are lots of nice little handouts in this adventure. My favourite is the one for the cheese shares the party gets. 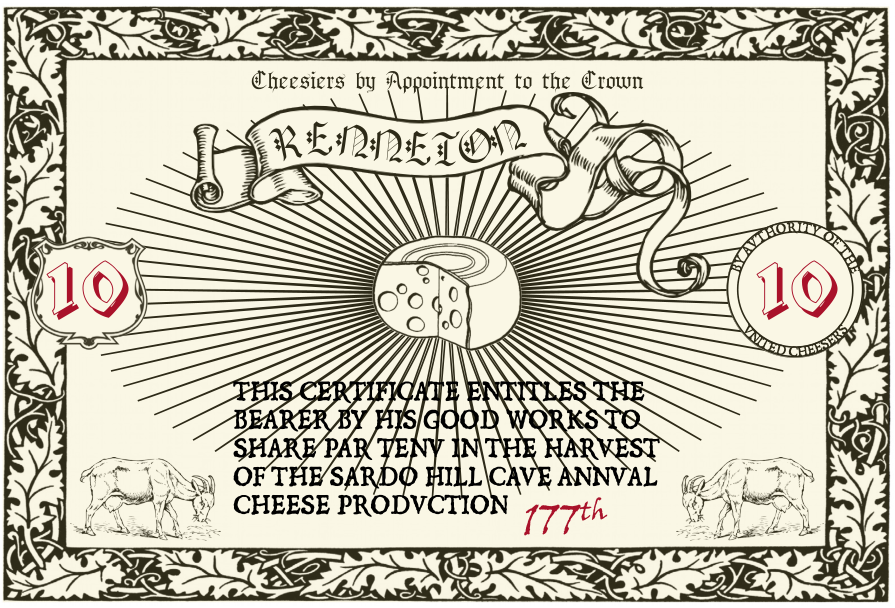 by Ava at November 03, 2021
Email ThisBlogThis!Share to TwitterShare to FacebookShare to Pinterest
Labels: Ava, Brain Infestations