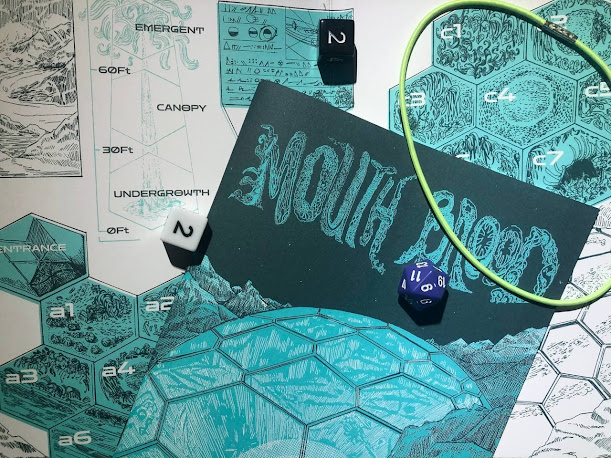 Welcome welcome to the first iteration of my Mundane Vacations series, where I will go through various weird OSR modules, crawl through all the hexes and return back to safety to give you this review.

Today I'll be visiting Mouth Brood, written and illustrated by Amanda Lee Franck (You Got a Job on the Garbage Barge and Vampire Cruise), edited by Andre Novoa and laid out by lina & nando. It is system-agnostic with a couple of generic OSR stat blocks, investigative and horror sci-fi games are recommended.

Inspired by my all time favorite sci-fi stories, Annihilation and Roadside Picnic, Mouth Brood is a hex crawl set in a dense jungle in the harsh snow of the Yukon. How is that possible you ask? Well, with an alien artifact left behind millennia ago of course! Let's look inside shall we.

Here we see that most of the zine is taken up by the extremely detailed bestiary. Each creature (or plant) fits its own unique niche in the self sustaining and self consuming ecosystem of the alien dome.

The zine itself is as self sufficient as the ecology it is depicting. It includes procedure for hex crawling, rolling encounters, and even character creation options.

As if the adventure runs itself. Players go to a hex, GM rolls encounter, reads encounter behavior, players react, GM rolls encounter, and so on. Best thing about running this was that I didn't have to make any choices about how to approach the creatures, and I never felt unfair to the PCs since I was just following the zine's descriptions.

But GMing Mouth Brood isn't a passive role. The task becomes to build connections between every part of the microcosm, figure out how the PCs actions will ripple through the food chain. For me this was incredibly fun. We even had a "there is always a bigger fish" moment in our game, when several creatures hunting one another managed to line up.

Needless to say: the bestiary is the star of the show. Over half of Mouth Brood's pages are explanations of flora and fauna behaviors (each one illustrated as well!). Each has a d4 table of things they might be doing at the moment and an 'if observed' entry. Both help the players understand how this creature works and take appropriate measures to capture it, and help the GM to faithfully portray it.

On that note, the goal of this adventure is to capture 5 live specimens for the Astralem Biotech Corp. Each hex offers plenty of opportunities to encounter at least one organism that you can add to the field report. Our well equipped party of 2 (+4 mercenaries) has completed the task in about 2 hours of real time. I imagine a bigger group with less resources would take a bit longer.

The hexes themselves are keyed in a way that builds paths and connections between them. Blinking lights lure adventurers towards them, and scratch marks on the trees warn away. The crawl doesn't rely on PCs reaching specific points, so the party may as well explore on their own. Still, the links provide connective tissue between all the weird and independent parts of the hex map.

Speaking of which, the removable cover/map was super convenient to detach and reference during play. I love every zine that does this.

As per Manifestus Omnivorous rules, within the dome there hides ONE monster. More monstrous than any other thing we've encounter previously in the zine (and it's been a scary ride!). This creature is at the top of the food chain in the dome. It will hunt anything and everything. It is frighteningly efficient, it has evolved to be this way.

It has an almost magical ability to move through spaces without sound. Like a ghost in the form of a saber-toothed tiger. Can the PCs escape it's wrath? Maybe, but they will have to use everything they got to outwit the monster.

When I was in middle school I had this nice thick green tome "Mythological Creatures". It was a collection of all kinds of beings, neatly arranged in alphabetical order (with the rare illustration). It was my favorite thing to read, despite that it was kinda dense and lacked an epic story. I was entertained just by imagining all the descriptions come to life.

This is what Mouth Brood feels like to me. A living and breathing mega-organism of funky beings.

So even if you are not planning to run a hex crawl in the near future, I would grab this just for the bestiary. The creatures presented can fit into any weird horror setting and exist as a stand alone monster, or just a cool encounter for PCs to freak out about.

by mv at October 27, 2021
Email ThisBlogThis!Share to TwitterShare to FacebookShare to Pinterest
Labels: Mundane Vacations, mv