In fall 2019, Magpie Games ran a success Kickstarter for a roleplaying game based on the Root board game published by Leder Games. In support of the Kickstarter, Magpie released a free Quickstart version of the rpg. In 2020, on Free RPG Day, Magpie released a free quickstart adventure, Pellenicky Glade.
This year in 2021, Magpie released another quickstart adventure for Free RPG Day, and plans to release the final versions of the full Root roleplaying game. At the time of writing, the second adventure is only available to people who picked up a copy in person, and the full game is only available as a pdf to Kickstarter backers. 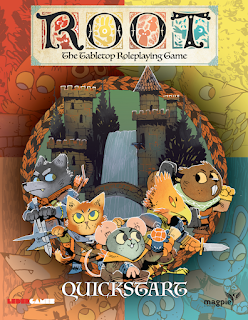 First Impressions
There's a certain sleight of hand that Root pulls off, in both its board game and roleplaying game formats. It's a trick that draws you in with lovely digital art showing adorable woodland animals, and delivers a game of conquering factions engaged in a brutal war.
The board game hands you cute little screen-printed, critter-shaped meeples, then sets up a conflict between a corrupt aristocracy, an invading imperialist, locals who are by turns apathetic and divided by ethnicity, a burgeoning multi-racial democracy, and opportunistic types who live outside the law and subsist on a mix of odd jobs, charity, and grift no matter who's currently in charge.
The roleplaying game casts you as the ne'er-do-wells, and drops you into a fantasy roleplaying game where all the fantasy is supplied by casting talking animals in all the speaking roles, where there is no magic at all. Your characters are weak and vulnerable, supplies are scarce and costly, the numbers are small and unforgiving, and unlike even the lowest of low-fantasy roleplaying games, you have nothing more fantastical than a well-forged sword to help keep you alive. 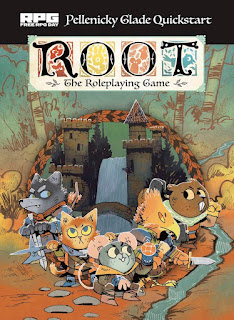