A Pinch of Salt: The Words and Deeds of the Chain of Tlachic 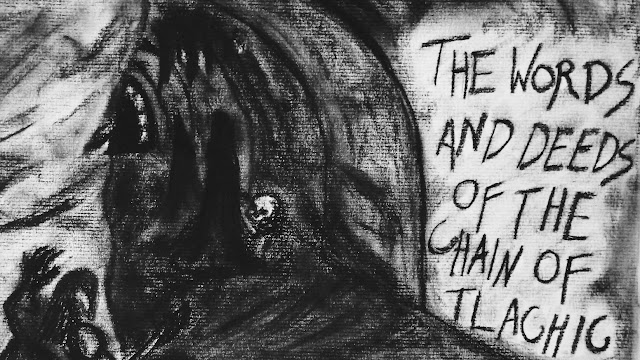 The Words and Deeds of the Chain of Tlachic

I'd not heard of Chain of Tlachic before receiving it, and I haven't heard anyone mention it since. It opens with the following phrase:

"THIS BOOK IS VULNERABLE, DISPOSABLE, AND CURSED."

It's part of a longer exhortation to take a pen to the book and write over what is already in it, and what will come to be the defining feature of this adventure. We'll get to that in a bit.

Chain of Tlachic is a 55 page megadungeon. Or, rather, it is what I am here and now calling a micromega dungeon - an environment that gives the impression of grand scope and scale but is nice and compact in practice. A megadungeon that it is conceivable to read and use with busy adults in 2-3 hour bites.

(A personal aside: I adore these sorts of dungeons, when compared to their larger counterparts.)

Each of the 17 areas of the dungeon consists of a two-page spread, containing:

The book hinges on those last three points. In lieu of providing any mechanics or traditional room keys, Chain of Tlachic puts its primary focus on the relationships between factions, monsters, places, and things, and how they effect one another. Nothing stays the same; actions taken here will have influence there. Returning to an area will reveal a place different from when you first came through. It's not a new concept, but it is very refreshing to have a book that sheds mostly anything that could get in the way.

The "mark up this book" notice from the beginning comes back here - practically, it's the easiest way to keep track of what changes have been effected. In doing so, each copy of the book will, over the course of play, become a unique artifact. The book is the notes, and this is explicitly intentional.

The framework of a Chain of Tlachic campaign is that the players are dwarves - constructed servants of the god Tlachic - attempting to reclaim the depths beneath their fortress from the Red Lady. If a dwarf dies, they are reborn in the Stronghold at the top of the map. This is a simple set up, and sufficient for dealing both with why players are in the dungeon and the inevitable deaths and reshuffled schedules that come with any campaign. It would be possible, I suppose, to play through this module using normal, non-dwarf characters. I wouldn't recommend it - something feels like it would be lost.

The book-as-notes-as-artifact approach requires either a physical copy or a print-out the pdf. It would run fine enough without engaging with that element, or to mark up the pdf, but I feel that would miss something.  Maybe that's just me wanting to be in line with the spirit of the thing.

On to the less novel and appealing - Spelling and grammar mistakes are common throughout, and the art can often get muddy and difficult to parse. Encouraging readers to mark up the book means these are solvable problems (they would have been solvable problems regardless, but it's nice to have authors who are vibing on the same wavelength), but that doesn't stop them from existing in the first place.

More pressingly, the four artifacts that have a major effect on the final conflict with the Red Lady are only brought up as such in that final segment of the book - not when the items actually appear in the dungeon. There are likely other such missing connections in the book, less important and less noticeable, but this is a pretty critical oversight for a dungeon so focused on those connections. Sure it's fixable, and would be whether or not I had direction to draw in the book, but I'd rather not have to fix something central to the adventure.

To wrap this up (since I feel like I have hit the point of going in circles should I keep going) what I like best about the Chain of Tlachic is that it is rough around the edges. It is the sort of awkward amateur work that is the lifeblood of a healthy artistic scene, and I'll recycle a quote from Noah Caldwell-Gervais:

Sounds about right for this.

by Dan at October 06, 2021
Email ThisBlogThis!Share to TwitterShare to FacebookShare to Pinterest
Labels: A Pinch of Salt, Dan