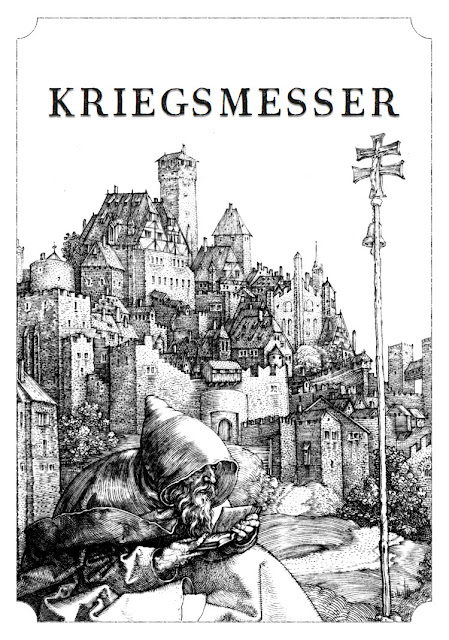 When I received Kriegsmesser in the mail I finally googled "kriegsmesser", and found out it meant "war knife". Which makes sense; Gregor Vuga's ZineQuest 2021 project is a tribute to "roleplaying games named after medieval weapons".
I love Warhammer Fantasy Roleplay's piss-renaissance Old World setting. I tend to pick up WFRP-a-likes sight unseen:
Warlock (quality); Small But Vicious Dog (yesss); Zweihander (which I have come to hate) ...
Anyway: I backed Kriegsmesser without really knowing anything about it. So Kriegsmesser surprised me.
+
Kriegsmesser grew out of a Troika! cutting. Its 36 backgrounds are compatible with that system: each come with a couple of lines of description; a list of skills and possessions; an a visual cameo cropped from actual 16th-Century woodcut art. 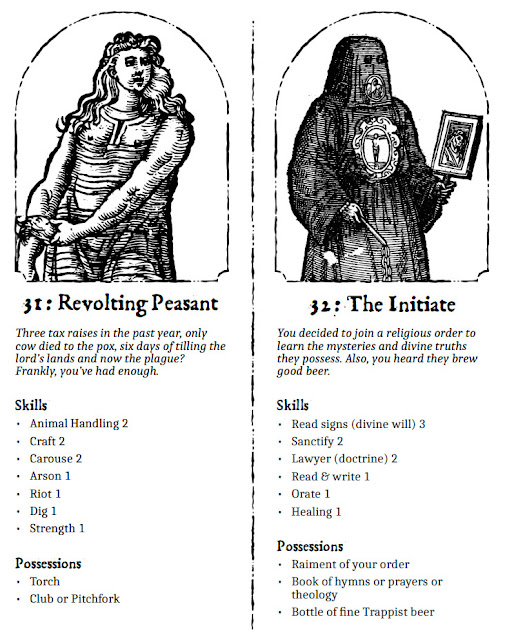 Cohesive and competently flavourful. My favourite is the Labourer, who always starts with "an empty pine box":

" You've spent your life breaking your back, working hard for other people's profit. You have nothing to show for it but a spectre of the future. "

(The obligatory ratcatcher-analogue , called the Vermin Snatcher, is here  -- check that box!)
+
Kriegsmesser also comes with its own ruleset.  Hits all the notes it needs to, with lots of orientation and advice for how to run a game -- but ultimately super-simple, mechanically:
Roll d6s equal to the value in a relevant skill, look at the highest result. 6 means you get what you want; 5 or 4 means you get what you want, at a cost.
It's not quite a dice pool, since only the highest result matters. No opposed tests.
+
Kriegsmesser intends to have this base mechanic handle fights, too. The combat rules - with armour, toughness and weapon values -- are nested in an optional section.
For a WFRP-a-like, this feels like a purposeful departure.
Many of WFRP's most celebrated adventures are celebrated for bits that their underlying ruleset does little to support: the investigative structure of "Shadows Over Bogenhafen"; the complicated timetable of "Rough Night At Three Feathers".
Ludwig von Wittgenstein never needed a statblock to be memorable.
Not to say that lethal, hyper-detailed fights isn't super Warhammer-y. (Kriegsmesser includes an injury table, broken down by body-part -- check that box!)
But here it feels like Gregor is saying: "I'm not Games Workshop and Roleplay isn't an ancillary of Warhammer Fantasy Battle; we can evoke grim-and-perilous-ness even if we fork away from heavy combat rules."
+ 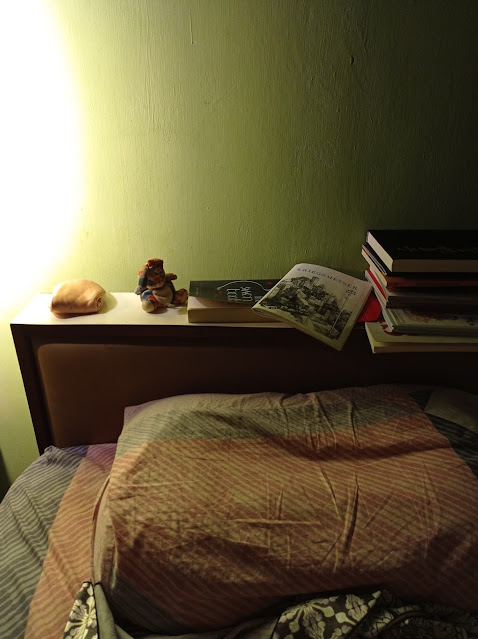 It has become ritual for me to read my partner Sharon to sleep.
Sometimes I read her RPG things. The other night, after I read her Kriegsmesser's introduction --

" The Empire wages an eternal war against Chaos. Its priests preach of Chaos as an intrusion, something unnatural ... These men see Chaos in anything that does not buttress their rule. They call it disorder, anarchy, corruption. They say that to rebel against their order is to rebel against god and nature. That the current arrangement is natural, rather than artificial.
" Meanwhile, the common people look to the Empire to deliver the justice that they were promised and they find none. They look to the Empire and do not see themselves reflected in it. They look around at what they were taught was right and good and see only misery.
Their world begins to unravel. Chaos comes to reside in every heart and mind sound enough to look at the world and conclude it is broken. "

-- Sharon remarked: "Nice one."
The RPG things I read her generally leave Sharon lukewarm. She has enjoyed a couple -- but, yeah: for many of these books, text isn't their strong point.
Kriegsmesser is the only time I can recall Sharon praising the writing of an RPG book without my prompting.
Nice one.
+
That introduction surprised me. It underlines Kriegsmesser's biggest departure from its WFRP-a-like pedigree: how it characterises Chaos.
Corruption, a mainstay of most grim-dark-y games, is made an optional rule, like combat. Explaining this, Gregor writes:

" Kriegsmesser partially subverts or deconstructs the traditional conceit of Warhammer where the characters are threatened by the forces of Chaos. In this game it is the player characters who are the agents of 'Chaos': they are likely to become the 'rats' under the streets, and the wild 'beast-men' in the woods bringing civilisation down. It's the Empire and its nobles and priests that are corrupt ... "

" The Empire encompasses the world yet is terrified of the without. It enforces itself with steel and fire yet considers itself benevolent. It consumes the labour of others with bottomless hunger yet calls its subalterns lazy, or wasteful, or greedy. "

Holy shit this is the first time I've seen the word "subaltern" in an RPG thing, I think?
I love this.
+
Rant incoming:
With every passing decade Warhammer abridges its Moorcockian roots more and more; nowadays it is "Order = Good" and "Chaos = Evulz", pretty much.
Gone are the days when chaos berserkers are implied to grant safe passage to the helpless (because Khorne is as much a god of martial honour as he is a god of bloodletting);
Or that the succor of Papa Nurgle is a genuine comfort to the downtrodden;
Or that Tzeentch could unironically embody the principle of hope, of change for the better.
As Chaos is distilled into unequivocal villainy, Order goons get painted as Good Guys by default --
Giving rise to Warhammer's contemporary problem, wherein fans are no longer able to recognise satire.
+
When I was introduced to 40K, it seemed pretty clear that the Imperium was a Brazil-esque absurdist-fascist bureaucratic state: planets are exterminatus-ed due to clerical error; the way it stamps out rebellions is the reason why rebellions begin in the first place.
Tragi-comic grimdarkness. That was the point.
Nowadays that tone has shifted -- and you're more likely than not going to encounter a 40K fan who argues that the Imperium's evils are a justified necessity, to prevent worse wrongs.
We went from:
"Space Nazis because insane dumbass fuckery, also chainswords vroom vroom so badass!"
To:
"Space Nazis because it makes sense actually, and also chainswords make sense because [insert convoluted rationalisation here]."
+
Even Fantasy Flight's Black Crusade line, which ostensibly offers a look at 40K from the perspective of Chaos, never truly commits to its conceit.
With prep you could play a heroic band of mutant freedom fighters, resisting the tyranny of the Evil Imperium --
But I don't remember Black Crusade giving that kind of campaign any actual support. Its supplements service the relatively more conventional "You can play villains!" angle; the Screaming Vortex is a squarely Daemons-vs-Daemons setting.
+
This tonal drift culminates, in my mind, with Age of Sigmar, Games Workshop's heroic-fantasy replacement of the old WFRP / WHFB setting.
Here's the framing narrative for AoS's recently-launched Third Edition. Let's see whether I've got things right:
A highly professionalised, technologically-superior tip-of-the-spear fighting force (the Stormcast Eternals);
Backed by an imperialist military-industrial complex (Azyrheim);
"Liberating" rich new territories (Ghur) for exploitation by a civilised settler culture (Settlers of Sig-- I mean, Free Cities);
Justified because the locals are irredeemable heathens (Chaos and Kruleboyz).
I mean, that's a sweet-ass Warhammer setting. It's contemporary, laser-guided lampoon. Except it is played totally straight.
In AoS, a literal crusade is justified as the moral good.
+
I think Kriegsmesser surprised me because its framing of Chaos -- as a promise, as the light of hope shining through cracks of a broken world --
It feels so fucking right.
Yes: its a subaltern deconstruction of the conventional moral universe of Warhammer -- but it is a take that is also already implied / all but supported in the various depictions of the setting: from WFRP to the modified title crawl of Black Crusade.
I'm annoyed I didn't think of it, myself. Damn you, Gregor!
And I'm annoyed that more Warhammer fans aren't thinking it, also.
+
lmagine if Kriegsmesser's perspective stood on equal standing as the GW orthodoxy. Imagine if, instead of simplifying stuff into "Order = Good" and "Chaos = Evulz", GW did a Gregor Vuga.
You'd have a Rashomon-ed Warhammer, where villainy depends on perspective:
You are fearful villagers, huddled around your priest, muttering prayers against the wild braying coming from the trees beyond your gates.
You are Aqshyian tribeswomen, defying the thunder warrior towering over you, the foreigner demanding you bow to his foreign god.
You are a Tzeentchian revolutionary cell, desperately trying to disrupt a Inquisitor's transmissions so your home planet isn't destroyed by fascist orbital fire.
+
Get Kriegsmesser HERE.
+++
by Zedeck at July 19, 2021
Email ThisBlogThis!Share to TwitterShare to FacebookShare to Pinterest
Labels: (P)Late Mail, Zedeck