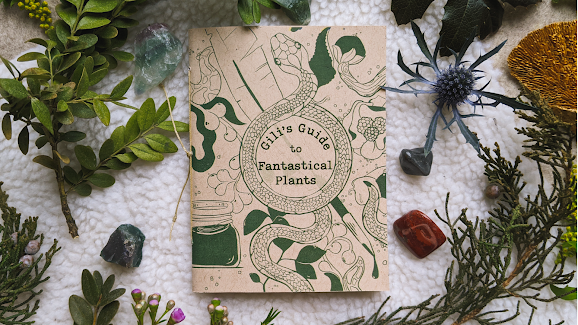 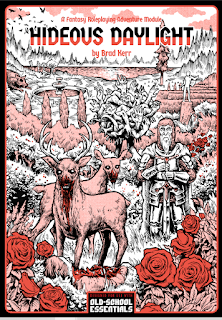 A 34 page low-level adventure through a demon infested garden cursed with permanent daylight. The cover art (Matt Stikker) is amazing and sells the adventure. Inside the layout is crisp, interior art passable, and the maps match the whimsical tone of the adventure, though the pixelated style of both maps and interior art clash with the cover. The adventure itself contains great interactivity, excellent simple puzzles, several monsters that require thought to overcome, decently written NPCs, and an excellent basic premise.

Arthurian and fairy-tale theming is marred by many inconsistent encounters with otherworldly “visitors” that are far stranger than the rest of the setting with its shadow demons, nobles, and blood thirsty cursed animals suggests. Designed as a small hex map with single keys for each hex and three small mapped locations, Hideous Daylight is a sizable adventure, though the hex map itself seems unnecessary. Distance and visibility in a 2.5 x 2.5 mile hexagonal garden surrounded by a wall doesn’t warrant a hex map, and the map's presence hints at a sort of unconsidered formalism. A point crawl between keyed encounters, or even a standard keyed map with a larger scale, would have worked well, disrupted the artificial feeling spacing of the hexes, and allowed the inclusion of some natural obstacles or other elements that could have made navigation of the garden more compelling.

Despite these stumbles, Kerr has generally solid design, using a paragraph and bullet point style with shorter keys. The adventure itself manages to have a distinct story to unravel, without forcing a specific conclusion or a linear narrative, something many adventures fail to do. Likewise the inclusion of a page detailing how events will unfold after the most likely actions of the players is useful, making Hideous Daylight easier to place in the context of a campaign. In tone, including inconsistent digressions, and map concerns, it reminds me of B3 - Palace of the Silver Princess.  B3, despite some issues, is one of my favorite of the old TSR B series: whimsy, a story to uncover, and variety make for a compelling adventure. Hideous Daylight is a compelling adventure that would fit well in a more fairy tale influenced setting, though some changes to even out its rougher patches and create a more coherent whole might be warranted. (Gus) 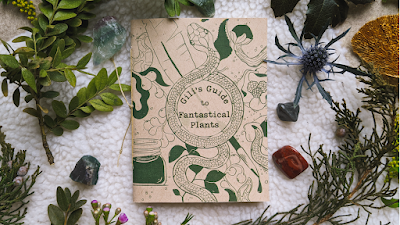 Gili's Guide to Fantastic Plants is a small size (A6?) 40 page zine. It's fictional author is Gili, a non-binary, traveling half-devil, who has written a naturalist's guide to fantastical plants. The physical product is risograph printed and hand bound, with consistent attractive illustrations throughout. It details 60 fantastical plants, split into 3 groups of 20: utility, edible, and poison. Most plants have an illustration, and there is a small icon in the corner of each entry that tells you which group the plant belongs. The layout and illustrations are attractive and the information design is good.
Some of the plants have a veneer of botanical plausibility, others are quite imaginative and whimsical. Some have excellent uses for outdoor exploration, like compass ferns whose tips always point towards magnetic north. Others are useful tools like cracklepines that can be spread about to foil stealth, or corpseguard moss that will keep a corpse fresh. We also find more whimsical entries like wishingcress that will take on the flavor you imagine, and deadly flora like vein vine that follows blood, digging its way through the veins of its victim. Some are a bit workaday, like a gourd that explode like a bomb, but most entries have flair.

If you want 60 fantastical plants to add your wilderness adventures, this zine delivers. But how to use it in play? You could use it as an in game document, literally giving the zine to you players, perhaps as a little handy tome they find in a treasure haul. On the other hand, the zine doesn’t provide you with a system to incorporate flora into your wilderness adventures. For example, do we include the plants in encounters tables or overloaded wilderness encounter dice as a benefit for those who know herbalism? Or place them in hexes? How do we handle the knowledge skill in herbalism? What this delicious little zine really calls for is some kind of naturalist mini-game. Call it a provocation to design. (Ben) 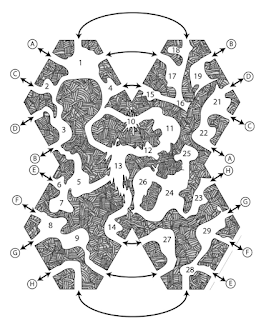 Before the “OSR” was dedicated to repetition of the cliches of grim body horror there was a powerful understanding that old D&D was a game, and as a game it was inherently humorous. The distinction between this "gonzo" and “the weird” was an element of recognizabity and reference underlying the bizarre. Infinite Caves of the Shroom Goblins, a free six page adventure by the notorious Dyson Logos was published in 2011 and remains a free gem of gonzo adventure.

I could be critical: it has no art, there are a few overly complex mechanics, its keys are relatively unvarying and not written with the greatest attention to use at the table but … these complaints are minor: Shroom Gobins is well written, keys are quite concise, usability sufficient, and mechanics functional -- this is a glorious, profoundly underappreciated artifact from the last decade. The setting is recognizable (It’s "Labyrinth" the 80’s goblin Muppet movie - you encounter feathered hair, bulge wielding elf David Bowie) and entirely absurd in the best of ways. It’s also aesthetically very different from the gray stone corridors of the typical nostalgia driven early “OSR” offerings, while upholding the finest traditions of a faction centered dungeon crawl. Whimsical, yet entirely serious, the varied Muppet goblins and morose Goblin King (David Bowie - I need to repeat that) aren’t even the most gonzo aspect of this adventure. This is experimental stuff. In an era of zone based point crawls, Infinite Caves creeps back from the dawn of time to be truly intriguing yet remainin true to the procedural dungeon crawl … the map’s drawn (not by Dyson, which is shocking) on the outside of an irregular octahedron. That means Infinite Caves' 29 keyed locations connect to each other in unexpected ways forming an endless dungeon that constantly loops back on itself.

I don’t know how well this works - such things are confusing and very hard to present to players, and the hook of trapping them in the caves is always a tricky one - but Infinite Caves is a genuine experimental map design for a cave of silly Hensonesque brightly colored Muppet goblins. In an era of grumpy castles full of drear and heavy metal album cover sensibilities, Infinite Caves of the Shroom Goblins deserves a fully illustrated, updated re-release more than most other adventures I can think of. Grab it now.(Gus)
Where is Margesh Blackblood? - Tim Shorts - Swords & Wizardry - 12 Pages. 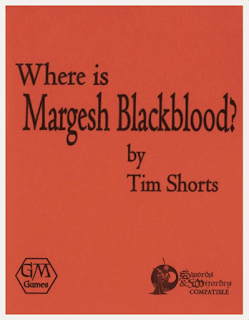 This little free adventure sends a party in search of the bandit Margesh Blackblood. The conceit is that he is hiding in one of four possible locations, for which the DM dices at the start. The assumption is that the party will intimidate or bribe one of his associates to give up the four possible locations. The adventure then consists of brief write-ups of the scene the party will discover at each location, with terse notes for how to handle things if Margresh is or isn't presents. It closes with stats and a description of Margesh and the other bandits.
This adventure is about as barebones as they come. It was originally a one-page dungeon submission, and it shows. It has basic computer designed maps and no art. This lack of adornment goes deeper, in that the write up for each location are dry, even where there is possibility to embellish. For example, all we learn about the shrine to the God of Dark Fortune Vynos is that his offerings are in a trapped hole in a piece of wood. This is a missed opportunity!
On the other hand, the set-up is fun, especially for a lower level crew who might have to think creatively when confronted by greater forces. The best thing about the adventure is that Margesh as described is an attractive figure, part rebel, part bandit, and part robin hood, and the party could well end up siding with him. The adventure seems quite open. The picking 1 in 4 locations conceit adds some drama to what would otherwise be a paint by numbers catch-the-bandit adventure. The descriptions of the location via scenes in media res, while not my preferred general method, works well at this small scale. While the taste of vanilla is strong, with a few added imaginative toppings this adventure could make for a pleasing diversion. (Ben)
by Gus L at July 22, 2021
Email ThisBlogThis!Share to TwitterShare to FacebookShare to Pinterest
Labels: Ben L, Cryptic Signals, Gus L