A Pinch of Salt: Lair of the Lamb 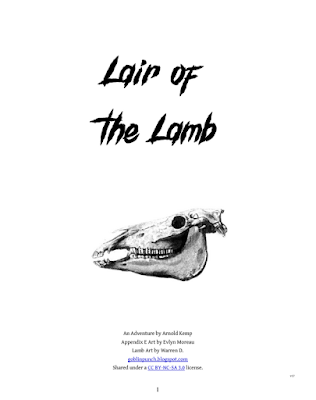 Lair of the Lamb

Up front I think I should note that Arnold is literally the reason I am part of this scene at all - Goblin Punch was my introduction to the OSR and it was Arnold's comments on my own blog that got me properly involved in the G+ scene back in the day.

Right then, that's out of the way.

Lair of the Lamb is a free 51 page pdf containing a 46-room dungeon and the core rules for Arnold's revised Goblin Laws of Gaming. I will be focusing primarily on the first half of the dungeon itself - while I am fond of the GLOG and its infectious spread around the blogosphere I didn't use it while running the Lair, and I likewise did not use the expanded second floor with the ghouls.

Lair of the Lamb is a funnel and teaching dungeon - every player gets a handful of level 0 peasants who die in one hit. Everyone wakes up in a pitch black room with no possessions. There's a monster in here with you. Get out if you can. Dungeoncrawling is reduced to its core elements: light management, risk assessment, using the tools at one's disposal, creative solutions. Since tools are so rare, squeezing every possible use out of them is necessary. Since challenges are open ended, those unusual uses are rewarded.

(An example of an open-ended challenge: a sarcophagus with a false bottom. There's a room below filled with treasure, but it's a 10 foot drop. The edges of the sarcophagus are sharp enough to slice ropes.)

Room descriptions are minimalist - things of note in bold, NPCs in red, treasure in green, bullet points. Good, easily readable formatting. Each page has the relevant subsection of the map up in the corner. Precisely as much description as the room warrants (a supply closet, for example, is described only as "Broom, Gong, and Hammer"), but nonetheless is evocative in that short space - "A throne of sheep bones and unfired clay", "A golden sensory deprivation helmet", "A mural of a crab being groomed on a woman's lap", "[The Lamb] reeks of blood and ammonia", and so on. Single sentences, nothing fancy, more than enough to work with. I could add additional details as I saw fit or let them pass on by without issue.

The art is minimal - some public domain images, a drawing of the Lamb by Warren D, and some illustrations of classes by Evlyn Moreau. Precisely what is needed for this sort of thing.

The Lamb itself is the highlight, of course- an excellent setpiece monster, disgusting and unsettling and terrifyingly dangerous (if you're not super lucky with encounter rolls like we were). It's the primary, and potentially only, monster encounter in the entire dungeon - the only other ones are either sequestered on the second floor or won't appear until the Lamb is killed.

It's like a xenomorph - a big, flabby, piss-smelling, skull-headed abomination-unto-Nuggan xenomorph. And, of course, another prime teaching tool for OSR gameplay: Monsters are dangerous, monsters have traits that can be used to your advantage: (fear of fire, fear of injury, identifiable smell), combat can and often should be avoided, combat can be stacked in your favor.

For the actual playthrough I ran the dungeon with five players (including fellow BoC member Ava) over two sessions, each ~2 hours long, which turned out to be enough to clear out the main floor of the Lair. Each player controlled two characters, with two additional peasants as backup for a group (for a bit of additional flavor I recommended that each pair of characters had some sort of pre-existing connection. Mostly sibling pairs)

Thanks to some merciful random encounter rolls and some clever work on the players' parts, they avoided a total slaughter. Drinking goat blood to slake the initial dehydration gave them an early edge, and one player consorting with the demon DAVOK gave them one very handy fireball during their first major encounter with the Lamb.

Several of the players had played in the Lair before, and that enhanced the experience, I think - it's so open ended that prior knowledge opens up new and creative avenues as according to the situation. I don't think people completely new to it would have dabbled in DAVOK's obviously bad news treasure chest - and they even went as far as to use the six second prophecy fruit to check for a trap!

High point was late in session 2, when a character was bitten by a poisonous snake. Instead of save vs death, I did the "gradual infection with spreading patch of gross color" trick, and the PC managed to survive by slicing her arm off in a trapped coffin before the poison had progressed past her elbow.

They managed to trap the Lamb under fallen masonry for long enough to clear out the last thing they wanted to investigate and escape - they didn't kill it, so they never encounter the Little Lambs or the priests, but by the end 10/12 of the party managed to survive and they had recovered both DAVOK and the necromancy tome.

Perhaps most praiseworthy is that Lair of the Lamb got me to actually keep track of time and light in a dungeon, and I actually found it fun - that has never happened, in all my years of playing. Not once, until now, and unlikely to happen again anytime soon, I think. But it happened, all the same.

I ended the second session with the survivors opening up the door to reveal a sky dominated by a gas giant and its moons, orbital infrastructure like a silver spiderweb across the sky. Because the great thing about starting off underground, is that you can put whatever you want on the surface.

All told, I think the Lair is the kind of dungeon we only get every couple years - one that's been intentionally designed to be the best dungeon it can be, rather than a collection of stone rooms and random table contents. Superficially, the former might look like the latter, but practically there is vast gulf between them. And even beyond that, it's free, it has rules in it, it can get people started with something to read the pdf on, some scrap paper, a few pencils and one set of dice. That's prime RPGs for me: free and wild and weird and raw.

Highest recommendation, without qualification. There will be something in here worth reading and learning from, no matter your circumstances.

by Dan at July 13, 2021
Email ThisBlogThis!Share to TwitterShare to FacebookShare to Pinterest
Labels: A Pinch of Salt, Dan

Below is a shared review of a 2021 adventure released for Old School Essentials: Holy Mountain Shaker , written and illustrated by Luka Reje...