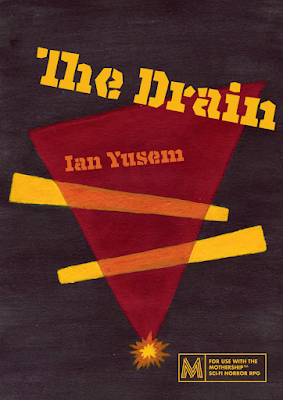 I return to this post three quarters of a year after I first drafted it. I had hoped to get a second session of it played, but it was never to be. Say la vee.

The Drain is a 16 page 0-level funnel for Mothership, where the players take the role of prisoners in a Bible-school reform prison tasked with recovering a relic from a collapsing colony habitat in exchange for clearing their remaining sentences. The habitat is presented as a pointcrawl on an inverted cone, which handily makes for a very nice looking map.

Pregen characters, blank sheets, and some mp3 files of creepy radio chatter are provided (alas, I wasn't able to use this last one). Character sheets have art by Evlyn Moreau, module art is Sean McCoy's instantly-recognizable scribble art, and map by Andrew Walter - it's all excellent.

The Vibes are strong here. Prisoners wearing tinsel halos. Horrible fucked-up meat monsters. The feeling of unease when you're driving a country road in mid summer and seeing signs about Jesus opposite houses that you can't ever imagine being new or whole or unrotten.

The writing is what you hope for in a Mothership module - tables, bullet points, bolded key terms.

The opening of the module - unarmed prisoners disgorged from boarding craft into an open battlefield - is effective imagery but it works less well in practice. You're instructed to roll for two gas clouds per stretch of no man's land (three stretches in total), but it's unclear as to whether or not they were to be simultaneous, sequential, or choose 1. I had to fudge the first roll of the session because one of my players would have lost all four of their characters instantly to nerve gas.

Moving past the battlefield, the players reached an abandoned farmstead, where they found  a remote capable of shaping the nanite-infused soil of the station. Single sentence description, no mechanical interaction.

It swiftly became the highlight of the entire session. In the next encounter (an open field with a sniper up on a billboard) they were building earthworks for cover and raised a tower with a ramp to reach the abandoned VTOL hovering above the field. It was some fantastic tool-based problem solving, the sort of ideal RPG scenario.

The session ended with the players squeezing the surviving prisoners onto the VTOL, and which would allow them to cross the river into the ring. Unfortunately, due to scheduling issues among the players, I was never able to gather folks for the second half (and this post laid fallow nor nine months).

Had I played further, I would likely have started throwing in consequences for the time-cost of using the remote, but even then not too much - folks were having a great time.

As random encounters only occur when moving to a new area, I pre-rolled them and any supply caches earlier in the day, which made things nice and smooth (and was an entertaining enough way of wasting time at work)

In the time since I've played, The Drain has been expanded to a trilogy (alongside Inferno and Wrath of God). I have not looked into the other two parts (there is so much Mothership stuff out there), but I feel like I would check them out if the mood takes me.

Would I run it again? I would with a revision of the opening sequence - possibly adding some variable or choice for the players. Do you run for the shelled structure, or to the treeline? Something of that nature. But the rest of it was fun, I'd give it a thumbs-up.

by Dan at September 07, 2022
Email ThisBlogThis!Share to TwitterShare to FacebookShare to Pinterest
Labels: A Pinch of Salt, Dan