Mundane Vacations - What We Give To Alien Gods 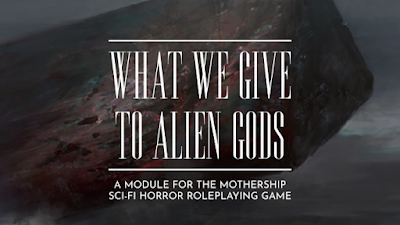 A vast unpredictable nebula! Three mysterious pillars rising from the clouds! This week our tour is landing somewhere in Gaelar XII, or The Amaranthine Nebula as they call it.

What We Give to Alien Gods is a 70 page full-colour zine module for the Mothership RPG, written and published by Lone Archivist (known for Primeval). It was funded during ZQ3, pitched as a slow burn scenario about exploring your character — a crossover between Event Horizon (1997) and Arrival (2016). As a big fan of both I did not hesitate to dive in.

Summary: reading and playing Alien Gods is in a way like deciphering alien writing. Beautiful and fascinating, but can be difficult to wrap your head around at times. In this review I’ll take you through my plights with this module, propose some solutions when I can, and see where Alien Gods excels.

I've playtested the module with a group 4 more experienced OSR players and a group of 2 less experienced players. We used my modified 0e rules, including a derelict die to track turns. It took us 6 hours to complete the module with the two player group.

Conviction is a key theme in Alien Gods. To represent it, characters start with a new stat (appropriately named “conviction”) that starts at 10 and goes down every time their core belief is contradicted. That core belief can be chosen by the player or rolled up on a table, where results range from Starship Troopers (“shoot first and ask questions later”) to Fermi-level (“humans are the only sapient life in the universe”). So far so good. I always enjoy solid ways to provide depth to characters. During our session, it helped a bit with worldbuilding and led to some unexpected situations. Would be interesting to see how characters with opposing convictions would interact.

When a character’s conviction reaches 0, they become susceptible to the influence of the alien god. Even helping it if the player chooses. The alien god fills the void left by the character’s fading beliefs. There is an interesting optional rule in which your character can no longer inhale oxygen. Brutal I know, but it ties into the mystery of the module later.

I was reminded of a French story game called Sphynx. For one, it has a similar idea of using beliefs as a character detail. As in Alien Gods, it presents the players with a series of questions about the world. Not all of them will be answered, but they are the main drive behind your character’s exploration. 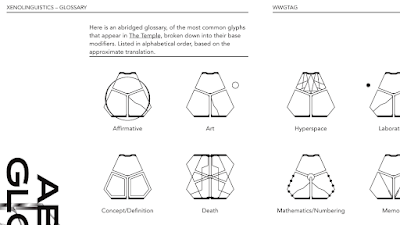 It wouldn't be Arrival inspired if it didn't have alien glyphs. After our beliefs are set, we are introduced to the two languages the crew will encounter. One set will be used most of the time as they are the language of the constructors of this place. The other is how a cosmic voyager communicates with the crew, so you won't be using it as much.

The glossary is the strongest part of the zine for me. The glyphs have a simple and unique logic to them that ties into the rest of the scenario. If your players (or you, dear reader) are into fantasy writing systems, this module is for you. This part can be used even outside of the module, on a different derelict on another planet.

Translating glyphs is resolved with a xenolinguistics check or to retrieve a tome of glyphs as a sort of Rosetta Stone that will allow you to translate them.

This section also includes guidance on how to create your own glyphs. Both languages follow a certain set of rules, but are freeform enough that you can express any concept within them.

Before diving into the nebula, we are presented with several ways to integrate our crew into this scenario. I like hooks 5-6 (payout for chamber exploration) and 7-8 (trapped in the middle of it all) since they provide the strongest motivations for the players to venture into the pillars.

There are three tracks that will fill up during the scenario based on different conditions.

Two of these tracks are responsible for tracking the alien god's escape. The god will escape either on their own or with the help of an NPC. The tracks are advanced after periods of real world time and after PCs trigger certain events. Solely based on real world time progression, the alien god will escape in 2-6 hours of gameplay. If you want to extend the game I would propose tracking in game time instead (with ~10 minute turns). You might also want to combine the two tracks into one since they essentially track the same thing. For me it helped to lower the cognitive load and was a bit clearer as to what the status is right now.

Trithal Fluency track shows how many Triathal glyphs you have translated. When you reach 10, you are considered fluent in Triathal and are not required to make checks to translate glyphs (and are changed by the new knowledge). My house rule would be to roll a d10 under this track to see if you understand a glyph. This makes fluency a more gradual thing instead of a binary state. 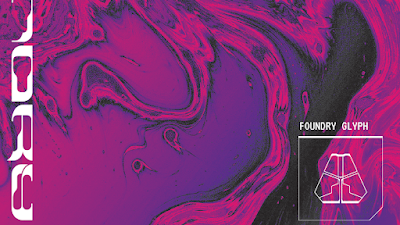 The scenario itself is divided into 4 acts: a hex crawl, three pillars of the temple, the shrine and the aftermath.

The hex map does not present interesting choices to the crew. There is only one visitable location (the temple itself) and the random table does not provide enough risk/reward to counteract that. The Derelict Merk-o-Tek ship is labelled on the map, but not keyed nor mapped. If you do run the hex crawl, my advice would be to populate the map a bit more using the derelict generator found in Dead Planet, or with locations relevant to your campaign.

The temple is the grand location of this module where the crew will spend most of its time. Outside it looks like three gigantic pillars, floating together as if tethered. Unfortunately it does not have a map or a flowchart of all its rooms, but the keys are clear about their relation to each other. I managed to draw up a flowchart in an evening. The structure consists of several hubs from which the rooms can be accessed. Usually the rooms have one core thing that can be interacted with or retrieved in order to learn about the place or delve deeper into the temple.

All of the keys have a clear hierarchy of information. Hidden entrances, items and loot are highlighted in different ways which makes it easy to reference. The clarity with which the rooms are presented is on par with Gradient Descent, and running it was quite smooth.

Each pillar represents a certain theme (based on the Triathal brain structure): logic, abstract and hyperspace. Some rooms don't have much to them, but others can really mess with the character's convictions. This module would work ideally mid-campaign, when PCs have some background to them which can be used by the Warden as ghostly visions, or reminders of the past. Much of the interactivity in Alien Gods is based on subverting expectations (established beliefs).

The shrine is where space-time starts to break down. Being the core of the temple, it is neatly tucked away in a pocket dimension. This is where the crew will probably meet the alien god. The final chapter of the scenario is the aftermath that explains what happens after the crew’s visit to the shrine, and the repercussions of their choices in the shrine. 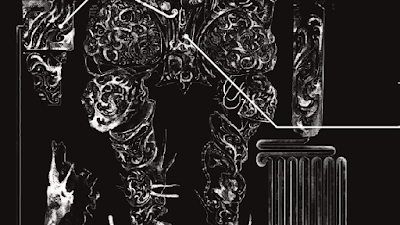 Well of a Thousand Thoughts

Overall it is useful to think of Alien Gods as a collection of scenes, rather than rooms. Even the zine aptly names each part of the adventure act 1, act 2 etc. Each scene is an opportunity for characters to confront each other about their convictions, or to confront their own beliefs. The temple and it's inhabitants are there to facilitate these interactions.

When I was reading Alien Gods I kept thinking about early 00s adventure video games. Navigating from screen to screen, solving obscure puzzles, picking up items that don’t have an apparent use at the moment but will be super important later. Alien Gods incentivizes learning by doing, like the first level of Mario Bros or Myst. Players will have to deduce what had occurred before them through the environment and objects they find.

Speaking of items, the back of the book presents everything you can find in the temple on a couple of neat spreads. The list ranges from weird to really weird. One thing I struggled with was making the function of the objects interesting for the crew to figure out. For instance, one of the items is a tuning fork that will show hidden areas when struck. It involves a very specific action to work and I wasn’t sure how to telegraph that to the players without spoiling it outright.

If the crew manage to find the tome, they can use its entries for two purposes. One is getting answers to the mystery. The tome is a record left by a Triathal in the final moments of their life. The second purpose is using the tome to translate complex glyphs. Each entry in the record focuses on a single concept, the glyph to which the crew can then translate.

The zine provides multiple entrances to the temple, making bypasses for those who aren’t keen on puzzle solving. On one hand - great, the more entrances the better. On the other hand, I question the necessity of a puzzle in the first place. Some later puzzles don’t have such bypasses and will have to be solved to delve deeper into the temple. Puzzles work best when everyone can meaningfully participate in them, so be mindful of your play group.

When my players entered the temple they were very hesitant to interact with the alien language. For the most part they were afraid of negative consequences for failing a puzzle (even if there wasn’t one). Most of the tension came from random encounter monsters chasing the crew around. Eventually they decided not to try to test their luck with the portals and to find alternative paths. Some characters acted based on their convictions, which was nice to see (and made the session a bit more chaotic).

What I felt this module lacked was some sort of unifying struggle or conflict. As written, the scenario will progress towards the god’s escape; there is no one to counteract that except the players. Instead of acting as mindless husks, I could definitely see some of the wandering monsters establishing a settlement in the old temple and fighting for their new home, but maybe that’s a different story altogether.

Alternative hook idea: you are a crew of a colony ship stuck in the nebula. This old temple is the only viable option to survive. Your goal is to clear out space for the settlement and make sure it doesn’t get destroyed by an Alien God (or will you turn to its side and reclaim its rightful domain?). 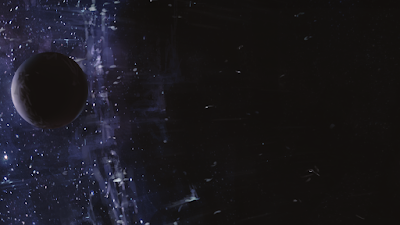 The essence of Alien Gods is about isolating the crew from the rest of the world and confronting their core beliefs about it. It is an exploration of conviction, channeled through the environment of a derelict.

Alien Gods is a demanding adventure to Warden. There is plenty of info to keep in mind (individual room climates for one). The Warden will be the one to create tension and present arguments against the characters’ convictions. I will be looking forward to the Warden and player materials coming out in the future, which will hopefully help with the issues I’ve outlined.

What do I Give to Alien Gods? M + λp − α out of 10. M being your Mastery of scene based scenarios,  λ - captivating Lore, p - Page layout, and α - the Amount of tinkering to fit the group.

by Emmy at June 01, 2022
Email ThisBlogThis!Share to TwitterShare to FacebookShare to Pinterest
Labels: Emmy, Mundane Vacations